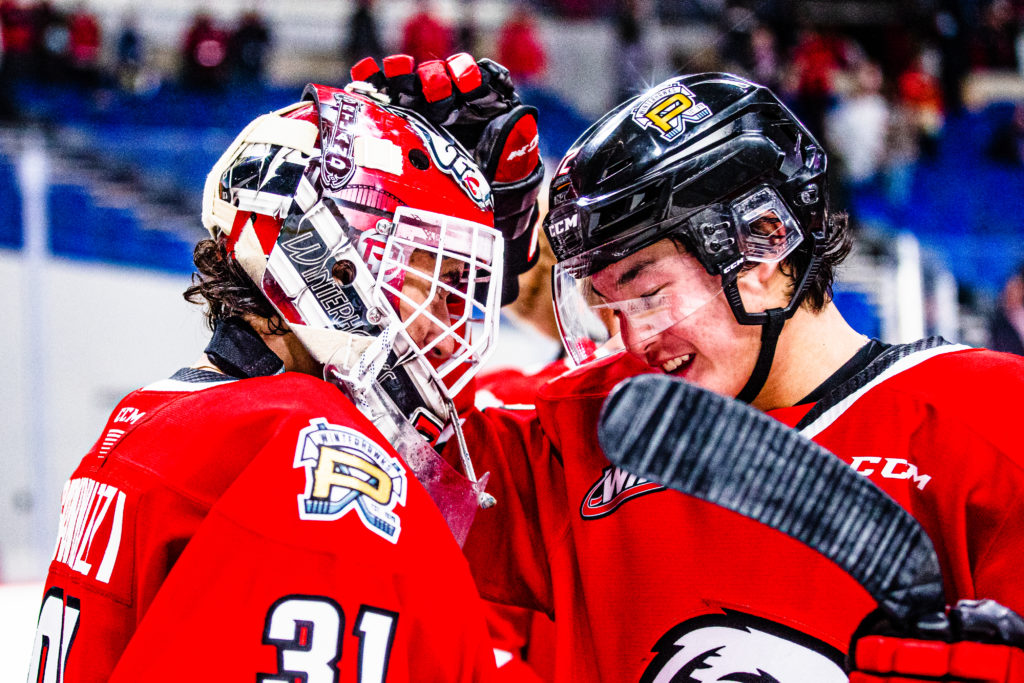 A Sunday shutout to conclude the team’s first three-in-three of the season, giving the Hawks their second consecutive win.

Dante Giannuzzi collects his second career WHL shutout, turning aside 29 shots en route to a 3-0 home win.  Highlighted by some dazzling third period saves, the 19-year-old goaltender looked stronger as the game progressed and he help secure a big team win to conclude the weekend.

“We talked about having a good first period and that was obviously our best period,” head coach Mike Johnston said.  “I think when you’re playing a three-in-three with both teams having the same schedule, it’s a tough weekend, and I just think if you get ahead of the other team it really plays on their mind a little bit.  They came back in the third and I thought had a really good third and Dante (Giannuzzi) was big when he had to be on the power play so there were some good signs tonight.”

The Winterhawks broke out for their strongest period of the season, netting three goals in the opening frame and chasing starting goaltender Campbell Arnold from the game.

Jack O’Brien opened the scoring with a sharp angle, forehand shot to from the low right face-off circle to give Portland a 1-0 advantage.  With early momentum, Portland earned a handful of power play chances and capitalized on a Robbie Fromm-Delorme chance in tight to stretch the lead to two.  A little over a minute later, Cross Hanas walked down the center of the offensive zone and scored his second goal of the season to give the Hawks their largest lead entering any intermission this season.

That proved to be all the scoring on Sunday evening and the Hawks defense remained strong for the final 40 minutes.

Spokane produced a couple of grade-A scoring chances down the stretch, but the Hawks netminder was too good. Giannuzzi made 15 of his 29 stops in the third period to hold off the Chiefs attack and secure his first shutout since January 18, 2020.

“We’ve got a pretty good schedule coming up with one home game next week and then we don’t play until the following weekend, so I like our schedule.  It gives us a breather and gives us a chance to work on things,” Johnston said.

The Hawks continue their home stand with a Saturday night contest against Tri-City on October 16.  Fans are encouraged to come early for Hawktoberfest and enjoy free beer tasting in the VMC concourse throughout the night.

“The boys really came out hard right from the start and we really played a full game today, which was huge.  I feel like the past few games we’ve either had slow starts or we’ve had hot starts and cooled down, but I thought today we really kept our momentum through the game.  The boys had a ton of energy especially our third game of a three-in-three it’s really important to come out hard.”