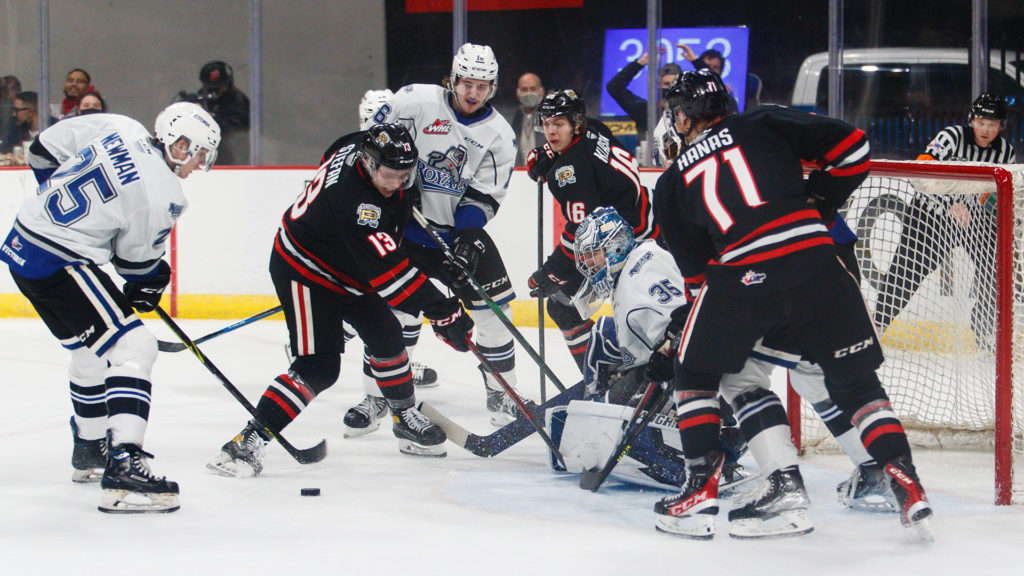 The Winterhawks put over 50 shots on net for a second straight game and climbed out of a 4-2 hole late in the final frame, but fell short in overtime as the Royals took the extra point with a 5-4 win at the VMC.

The Winterhawks held an offensive advantage for much of the night as they outshot the Royals 52-18 through 60+ minutes, but the Royals converted when it counted as they took a 5-4 win in overtime.

Portland carried an attacking mindset from the first drop of the puck on Saturday, outshooting the Royals 16-5 in the first period and picking up a 1-0 lead through 20 minutes thanks to some pretty passing between Jaydon Dureau, Cross Hanas and James Stefan that led to Stefan’s seventh goal of the year.

The Winterhawks kept that momentum rolling in period two, doubling their advantage just 50 seconds into the frame as Aidan Litke found a loose puck in the slot, wheeled around and fired a low shot into the corner of the net. Victoria picked up the pace from there, though, getting on the board with Riley Gannon’s sixth of the year at 2:09. Despite the Hawks again dominating the shot counter for the remainder of the period, the Royals managed to knot the score at two goals apiece as Bailey Peach found twine from Tarun Fizer’s cross-crease pass at 10:57.

Victoria entered the third period with a point to prove, as the Royals quickly took a lead, and then doubled it, inside the first seven minutes of the third thanks to Gannon’s second of the game and a power-play strike by Evan Patrician. As the period wound down, Portland continued to pepper Victoria netminder Campbell Arnold, and eventually broke through when Jaydon Dureau ripped home a top-shelf wrister for his sixth of the year at 11:59. The Hawks then tied up this thriller with just over two minutes left on the clock, as Stefan deposited his second of the evening on a wraparound that snuck under Arnold’s sprawling form to force overtime.

Portland registered a number of chances in the extra frame, including one that found iron behind Arnold, but it was Victoria’s Peach grabbing his second goal on the night with a seeing-eye shot at 2:15 of OT to give the Royals both points.

In total, Arnold stopped 48 shots in Victoria’s win, while Portland’s Lochlan Gordon faced down 13 in the Hawks’ cage.

The Winterhawks next host the Everett Silvertips on Sunday at 5 p.m. at the Veterans Memorial Coliseum.

“It was a great job by us to battle back (from being down by two), and we’ve got to take the positives away from this game, talk about the negatives and come in tomorrow.”