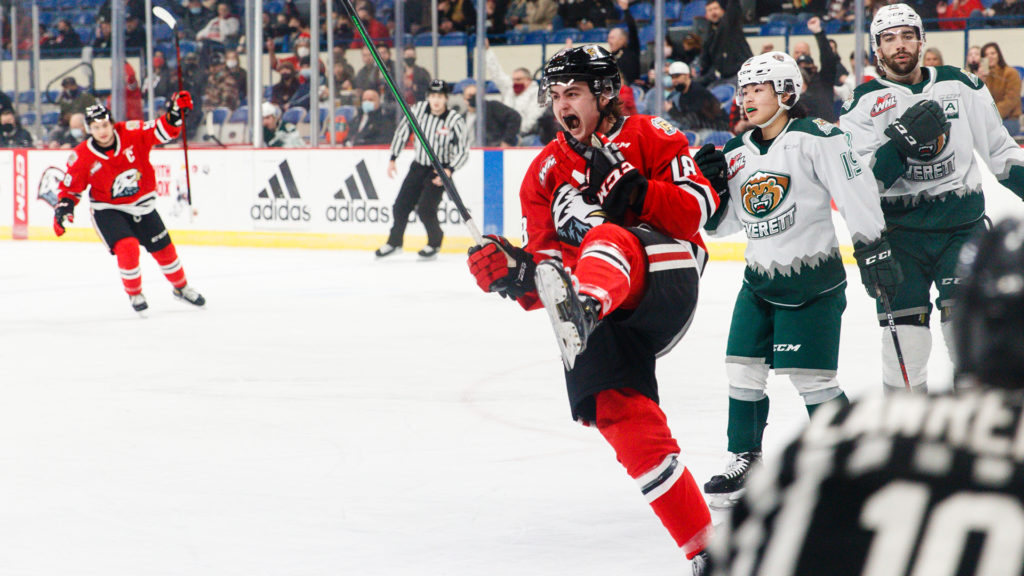 Seven different skaters scored for the Portland Winterhawks as they thumped the visiting Everett Silvertips 7-1 on Sunday.

Following a relatively even opening 10 minutes, the Hawks started to pour on the pressure and finally broke through on the power play when Tyson Kozak netted his 10th of the year off of a slot pass from Gabe Klassen. Aidan Litke doubled Portland’s lead when he found some open space in front and one-timed a a Jack O’Brien pass home for the goal, and Luca Cagnoni capped off a furious first frame with an individual rush up the left-wing side before rifling a wrister over the shoulder of Braden Holt.

The Silvertips relieved Holt ahead of the second period, but Koen MacInnes fared no better against the Hawks’ attack. James Stefan quickly made it 4-0 at 2:37 of the middle stanza, followed by a power-play marker from Cross Hanas at 6:54. With the rout well and truly on, Jack O’Brien made it 6-0 in the waning seconds of the period as he rushed up the win and wired a shot over MacInnes’ shoulder to end the frame.

Everett did spoil Dante Giannuzzi’s shutout bid in the third period with Ryan Hofer’s sixth of the season at 2:20, but Robbie Fromm-Delorme restored Portland’s six-goal lead at 3:37 to ice the game.

Holt and MacInnes combined for 23 saves on 30 shots in Everett’s loss. Giannuzzi stopped 31 pucks to pick up his fifth win of the year and his second victory recorded against the Silvertips. Giannuzzi and the Winterhawks remain the only U.S. Division goaltender and team to record a win over Everett this season.

Portland returns to the VMC on Friday, Dec. 10 to take on the Spokane Chiefs for Hometown Heroes Night, then battle the Chiefs once more on Saturday, Dec. 11 for the Teddy Bear Toss game.

“We started really hard on time, and we did a lot of preparation for this game. These guys are a big rival of ours, so we always take these games very, very seriously. We had some good practices leading up to the game…I think a lot of really good preparation led to this win. We played a smart, simple game today and it really paid off.”