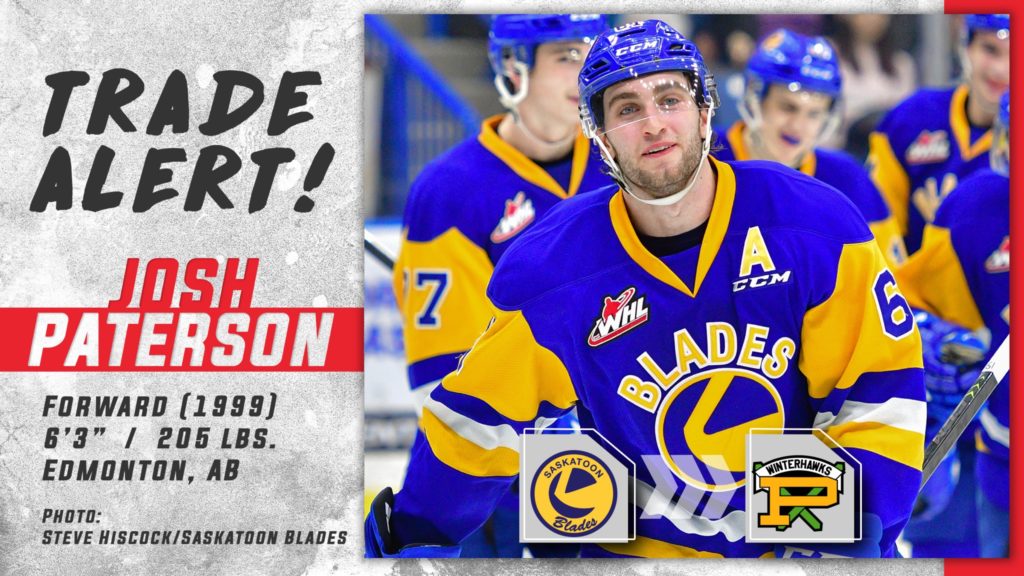 The Portland Winterhawks have acquired 1999-born forward Josh Paterson and a pair of WHL Bantam Draft picks from the Saskatoon Blades in return for forward Ryan Hughes.

“Ryan has been a quality player for us over the last four years and we know he will continue his strong play in Saskatoon,” Vice President, General Manager and Head Coach Mike Johnston said. “Josh adds size, experience and leadership to our group and is a versatile forward who can produce offensively.”

Paterson (6’3”, 205 lbs) has played 246 career WHL games all with Saskatoon, scoring 74 goals and 64 assists for 138 points. The Edmonton, Alberta skater is an alternate captain of the Blades this season and is a versatile forward who can play center and on the wing. He is second on the Blades with seven power play goals.

In addition to Paterson, the Hawks retain some picks with Saskatoon’s 2nd round draft selection in 2020 (acquired from Swift Current) and Saskatoon’s 4th round pick in 2021.

Ryan Hughes spent his four-year WHL career in Portland. Over the course of 250 career games, including playoffs, Hughes netted 68 goals and 95 assists for 163 points.

Both players involved in the trade were listed on the NHL’s Central Scouting List in 2017.

The Winterhawks organization would like to thank Ryan Hughes for his contributions to the team during his time here and we wish him the very best of luck in his career moving forward.