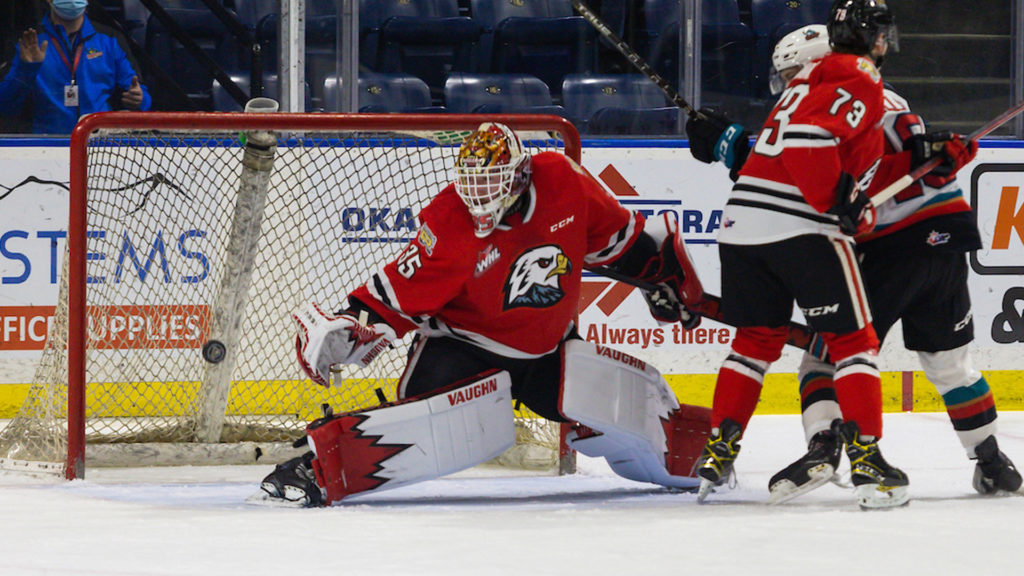 Portland picked up its fifth straight win and completed a four-game regular-season sweep of the Rockets with a 3-1 win on Saturday night in Kelowna.

James Stefan scored twice and Taylor Gauthier stopped 38 of 39 pucks in his Winterhawks debut as Portland knocked off Kelowna 3-1 to earn its fifth consecutive win and complete a 4-0-0-0 regular-season sweep of the Rockets.

Kelowna had the jump on Portland early in the contest, striking just over 30 seconds into the game as Jake Poole bagged his seventh of the year. But after weathering the Rockets’ storm, the Winterhawks eased into the game and knotted the affair at one before the midway point of the frame. Cross Hanas collected a loose puck in front of the net and spun off his marker before firing a shot over the shoulder of Kelowna’s Talyn Boyko.

Deadlocked at a goal apiece, both teams traded chances for the majority of the second period before Stefan gave Portland its first lead of the night at 14:53 of the middle frame. Ryan McCleary entered the zone and dished to a streaking Stefan on the right wing, who then wired a shot off of a couple of goalposts and into the net for the 2-1 lead. Gauthier stood tall in net to keep the score tied, then maintain the advantage after Stefan’s tally.

Portland continued to roll in the third period, doubling its advantage with Stefan’s second of the game at 7:08. The Winterhawks’ power-play unit carved up the Kelowna killers, with Clay Hanus finding Jaydon Dureau on the right wing, who then fired a seam pass to Cross Hanas at the left circle before Hanas found Stefan on the back door for his team-leading 15th goal of the season.

Hanas (1G, 2A) and Stefan (2G, 1A) each posted three points in the contest. Stefan’s two-tally effort marked his third multi-goal outing of the season and his second in his last five games.

The Winterhawks are next slated to take on the Kamloops Blazers at the VMC on Wednesday, Jan. 12

“You know over my career I’ve had lots of battles with Kelowna. They’re a team that, me personally, I get up for every game. I want to beat those guys more than anything. With that being my last game against them in the regular season in my career, I wanted to go out with a bang there. I’m just happy to be here and contribute to the team.”