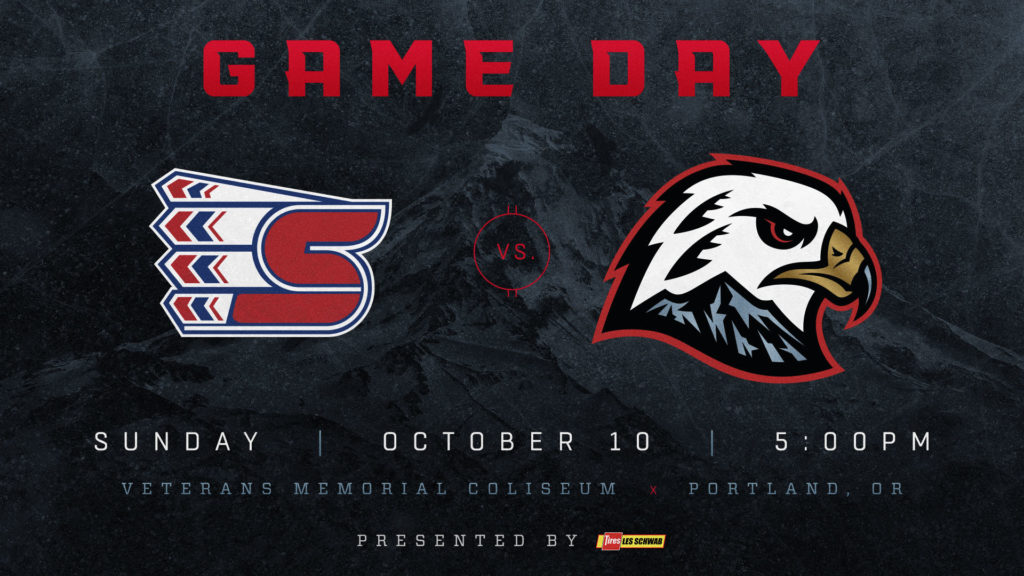 The Winterhawks cap off a busy weekend of hockey with their second home game of the season, facing a new foe on Sunday evening.  Join us for a family night of fun at the VMC!

Fresh off a win.

A win made our Saturday that much better.

It was a great night in Seattle, beating the Thunderbirds at their home opener.  The Hawks offense returned, scoring in each period and earning a key road victory in the early part of the season.  The icing on top of the cake?  Luke Schelter scoring the game-winning goal, his first goal in the Western Hockey League, and Lochlan Gordon getting his first win in his Winterhawks debut.

“It was great playing in a game like that. It gets you fired up especially with how harsh their fans are, but it was an awesome game and an awesome opportunity,” Gordon said after the win. “I think it’s just up from here.  We just keep going and hopefully get another win (today) and keep momentum going off that.”

The Hawks need to bring the same intensity tonight against Spokane, who has a strong top six forward corp.

Probably, but the adrenaline is flowing.

The Hawks wrap up their first three-in-three weekend of the season and enter the night with 21 healthy players.  That means the entire lineup will be used for the third straight game.

“You know when you win, you don’t even feel that stuff,” Don Hay said last night with a laugh about the team’s conditioning entering Sunday’s home game.  “That’s the good part of it, the guys are so excited right now and we’re used to winning here.  We found a way to win and hopefully that carries on.”

Tonight is a good test for the younger players to see how they can handle the early season grind.  You know what helps them?  Your energy.  Let’s be loud tonight!

We can’t wait to see you!

The Winterhawks had an incredible Pacific Office Automation Opening Night playing in front of the best fans last weekend and now the team is home for five straight starting tonight.

We’re hopeful to reel in plenty more wins this month.  For fans who want a faster, expedited entry to the VMC, the RQ adopted a new health check-in procedure to make your experience more enjoyable and help get you to your seats quicker.

Tonight, we are cheering on: Crissy Shrock from Independence, OR

What our Hawks fan could win: A brand new 2021 Toyota Highlander

Second straight night we’re cheering for a first goal from Hanner.  And a blowout victory to boot?  Love to see it.  Good luck, Crissy!