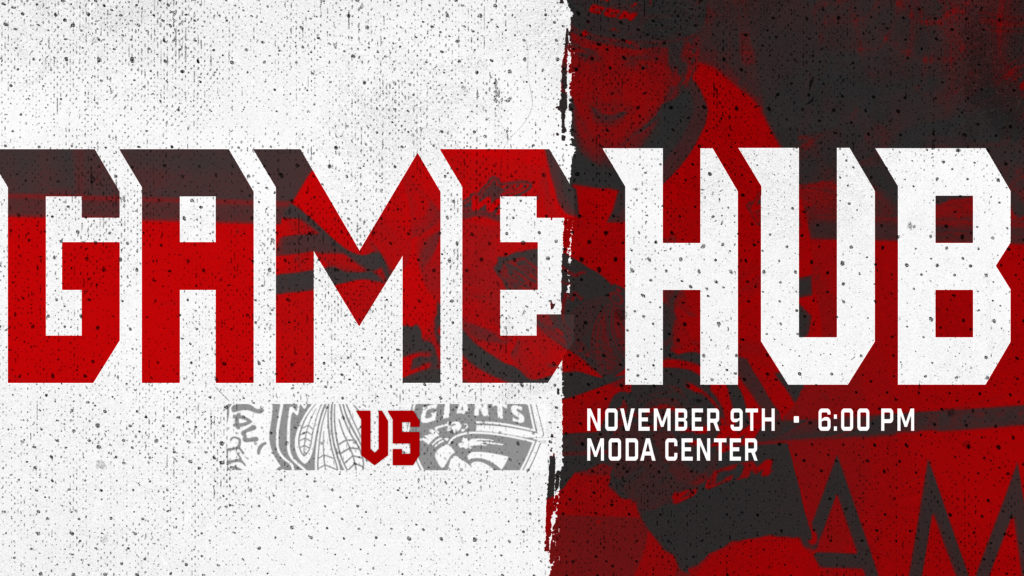 The Winterhawks wrap up their home-and-home series with the Giants on Saturday night. It is the team’s seventh home game of the year and first of two home November meetings with the Giants.

Listen Live: Winterhawks Radio Network and on the Winterhawks App. You can also listen live in the arena by tuning your radio to 98.1 FM.
Watch Live: WHL Live
Tickets: Portland vs. Vancouver
Tonight: The Winterhawks will honor the sacrifices of our men and women in uniform tonight at the Moda Center during the Boeing Veterans Salute.

Last night, the Giants beat the Winterhawks for the first time since February 14, 2018 and it was just the second time in 16 games this year the Hawks were held to just one goal.

They return to the Moda Center with a 5-1-0-0 home record. Meanwhile, the Giants have played just one road game since October 18 and they now sit just a half game back of the division lead.

Lukas Svejkovsky has been hot in November with goals in three straight contests and Trent Miner is 3-0-0-0 in his last three appearances, stopping 76-of-79 shots. Winterhawks forward and top 2020 NHL Draft prospect Seth Jarvis is tied for 12th in league scoring with 22 points. Only Spokane’s Adam Beckman has more points in the U.S. Division. He had the primary assist in the Hawks lone Friday night goal.

Portland is the first U.S. Division team to score 60 goals this season and their +19 goal differential is also tops in the division and second behind Kamloops in the Western Conference.

Tonight, the Winterhawks begin their longest home stand of the season. Six of the next seven games will be played at the Rose Quarter. The Hawks have to get off to a better start to have success against Vancouver because they have never won a game in which they allowed the first goal or trailed after two periods (0-3-0-1).

The Hawks and Giants wrap up their regular season series at the Moda Center on November 20.

Winterhawks Game Recap
A Proud Performance from Portland
1 day ago