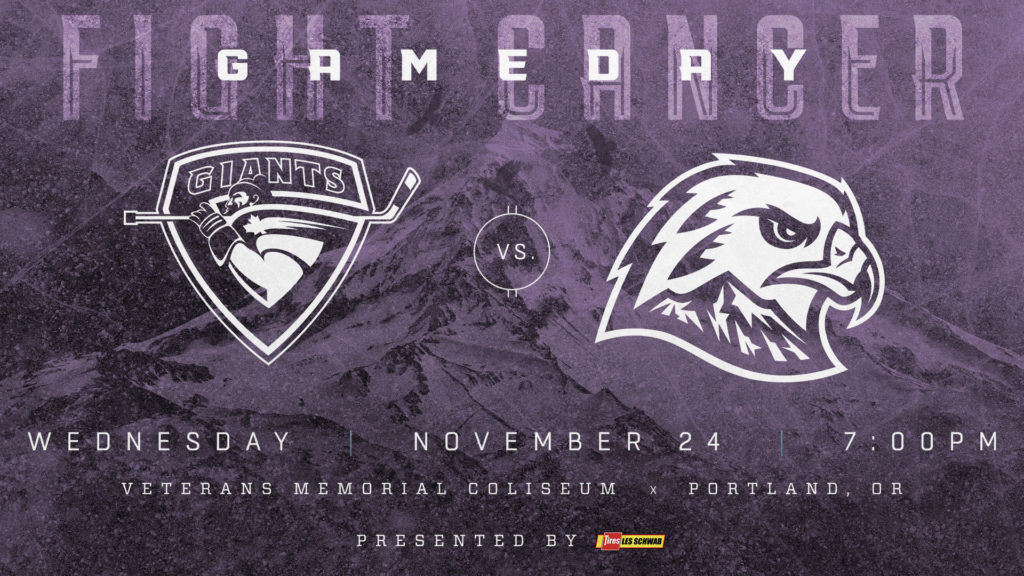 The Portland Winterhawks welcome the Vancouver Giants south of the border for a pre-Thanksgiving clash at the VMC on Hawks Fight Cancer Night.

Tonight, the contest on the ice is only half the battle, as Hawks Fight Cancer Night highlights and honors the strength of all those affected by cancer.

The first 2,000 fans in attendance will receive customizable rally towels, on which they can write their name or the name of a loved one who is battling or has battled cancer. Additionally, “Hawks Fight Cancer” t-shirts will be sold in the team store in limited quantities.

24 hours until the puck drops for Hawks Fight Cancer Night!

T-shirts will be available for sale in the team store, and the first 2,000 in attendance will receive a customizable rally towel!

Keep an eye on our social channels, too – after you helped us raise over $1,300 for local cancer awareness organizations with our auction earlier this week, we will launch a second auction with even more rare autographed Winterhawks memorabilia during tonight’s game!

The Hawks notched back-to-back wins for just the second time this year on the strength of contributions from throughout the lineup and between the pipes, but a few skaters have found consistency in their offensive game and continue to lead the way. Gabe Klassen is one of those, and with points in each of his last six games, he boasts the longest points streak of any Winterhawk this season.

These Hawks continue to set the tone, and their teammates have been meeting that standard lately as 14 different skaters recorded at least a point in last week’s sweep of Kelowna. The group will look to keep the momentum rolling offensively against a stingy Vancouver defensive corps tonight.

Playing With The Lead

Last Saturday’s 4-2 win over Kelowna featured something of a catharsis for the Winterhawks. After multiple games in which they coughed up multiple goals in quick succession to either erase a lead or fall behind early, the Hawks built up their advantage and stymied the Rockets’ attack for the better part of two periods, allowing just two goals and closing out the game with confidence.

Forward Dawson Pasternak, who scored the game-winning goal and was named the second star of the contest, knew that game was an important one for his team.

“(We’re feeling) really good. We’ve gotten into some trouble in the past with holding the lead, so I think tonight was really good for the team. We showed that we can play with the lead and that we know what to do with it, so it was a really great win tonight,” said Pasternak.

Getting that lead is especially crucial for Portland tonight, as Giants netminder Jesper Vikman stole the show when these two teams met on Nov. 6 with a 39-save effort that only fell short of a shutout thanks to James Stefan’s late strike. The Hawks carried play for much of that game, but Vikman had the answer almost each time Portland came calling and Vancouver cruised with an early lead. Should he take the crease tonight, the Hawks will want to get to him early – something they have found success with during this homestand as they have scored first in each of the three games thus far.

Tonight, we are cheering on: Mary M. from Vancouver, WA