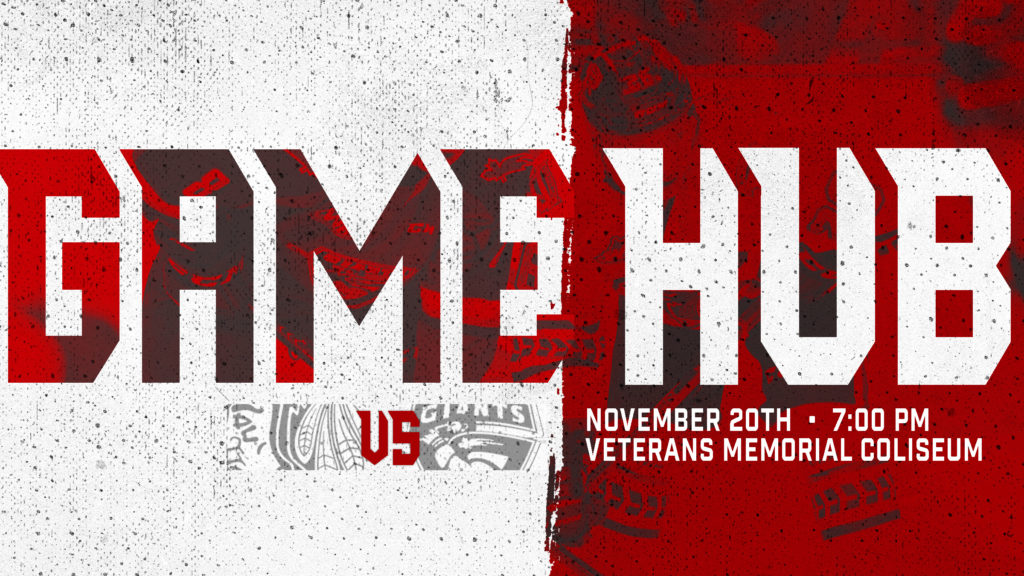 The Hawks and Giants wrap up their regular season meetings tonight for a rare weekday game. Portland is 2-0-0-0 this season during Wednesday night games and they look to extend their current five game point streak.

Listen Live: Winterhawks Radio Network and on the Winterhawks App.
Plus, you can listen to the game in the arena on 87.9 FM.
Watch Live: WHL Live
Tickets: Portland vs. Vancouver

Portland and Vancouver play their fourth and final head-to-head game of the regular season tonight, becoming the first series the Winterhawks will complete against a Western Conference opponent. The Hawks have won six of their last seven meetings against the Giants, outscoring them 22-13 over that stretch.

In the last meeting on November 9, the Winterhawks won a dramatic 2-1 game in the ninth round of the shootout. The last time the Hawks took at least nine shootout attempts in a game was October 1, 2006 against Kamloops (also a win). Jack O’Brien and Justin Sourdif were the two who scored in regulation during that last contest.

Expect a defensive battle tonight with both teams ranking inside the top ten in goals against and combining for four goaltender of the week honors this season. Joel Hofer is one of the top statistical goaltenders in the Western Hockey League and Arizona Coyotes prospect David Tendeck is the reigning Goaltender of the Week stopping all 38 shots in a 4-0 shutout win over the weekend against Prince George. He is tied for the league lead with three perfect performances this season.

Tristen Nielsen currently leads the Giants with 20 points and he is two points shy of 100 in his career. He has two points this season against the Hawks (both coming in Langley, BC) and five points in his last five games. First round NHL prospect Bowen Byram has been held off the stat sheet in eight of his last nine games, collecting just two assists.

On the Winterhawks side, Reece Newkirk is also on milestone watch. He is four games away from 150 in his career and is five points shy of 100. The New York Islanders prospect currently leads Portland with 25 points.

Both teams are good at holding leads into the third period. The Hawks are 10-1-1-0 this season when leading after 40 minutes of play and the Giants are 8-0-0-0 under the same circumstances. Vancouver is holding on to the second place position in the B.C. Division, winning five of its last ten games. Portland owns the WHL’s best home win percentage (.833).