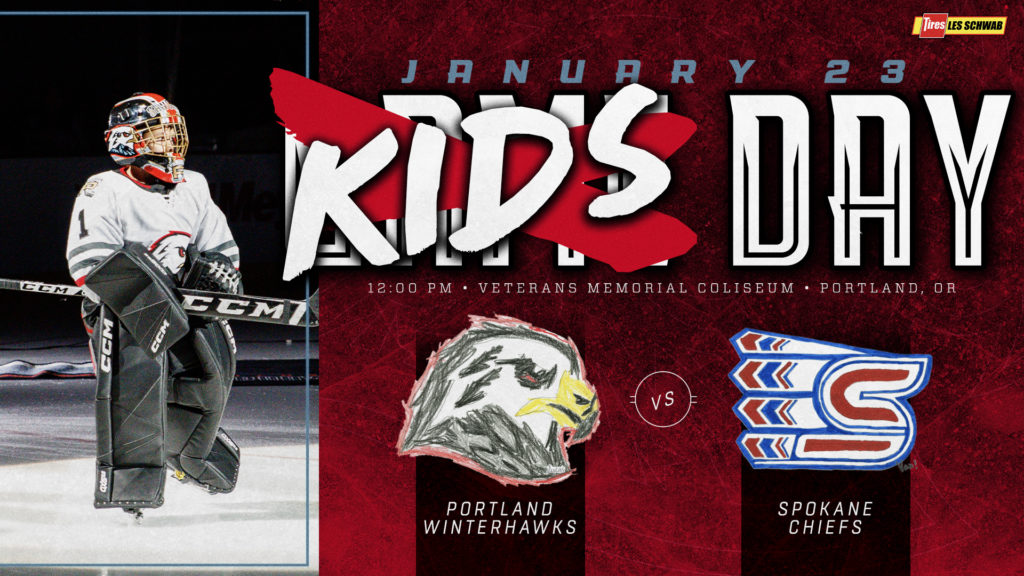 The Winterhawks welcome the Chiefs for a Monday matinee after picking up two wins on home ice over the weekend.

Kids Day Festivities
It’s Kids Day at the VMC! We’re dropping the puck a bit earlier to host a handful of youth-focused groups from around Portland coming to today’s game, so keep an eye out for engaging booths from the Oregon Zoo, Oregon Museum of Science and Industry (OMSI), First Tee of Portland and more out on the VMC concourse.

Today’s game will also feature in-game elements from Portland-area students, including the Fred Meyer 6th Player, an assistant public address announcer for the game, and games taking place in the rink between whistles.

Also, thanks to a handful of kids from First Tee of Portland for showing off their art skills and designing the Winterhawks’ and Chiefs’ logos for the game! We’re highlighting Lucas (Portland logo) and Van (Spokane logo) on our game day graphics, but there’s even more First Tee art coming up on the big screen at the game!

Home Cookin’
The first two home games of 2023 have been just what the Winterhawks needed, with two wins over Victoria and Lethbridge this weekend. Newly acquired forward Chaz Lucius hit the ground running with his first goal and four total points in those contests, thriving on a line with James Stefan and Jack O’Brien.

With a bit of momentum now on their side, the Hawks turn their attention to a division rival in Spokane, who has dropped five of seven to start the new year. The Chiefs, though, also picked up a win over the Royals this weekend, and can enter today’s tilt with confidence much like the Winterhawks. Led by a pair of rookies in Tommaso De Luca and Berkly Catton, the Chiefs sit 10 points outside the playoff picture and will be keen to pick up two points today. On the other side, Portland remains three points behind Seattle, and would love nothing more than to chase down their rival for top spot in the West.

Should be a great one today, Hawks fans!

Showtime for Cags
Luca Cagnoni won’t be in the lineup today, but we’ll call it an excused absence: he’s off to the Kubota CHL/NHL Top Prospects Game!

Set for this Wednesday at 7:00 P.M. PT, the 2023 Kubota CHL/NHL Top Prospects Game showcases the top 40 CHL players eligible for the 2023 NHL Draft from across the Western Hockey League, Ontario Hockey League, and Quebec Major Junior Hockey League. The 40 players were identified via a survey conducted with the NHL’s 32 teams.

Best of luck in Langley, Luca!