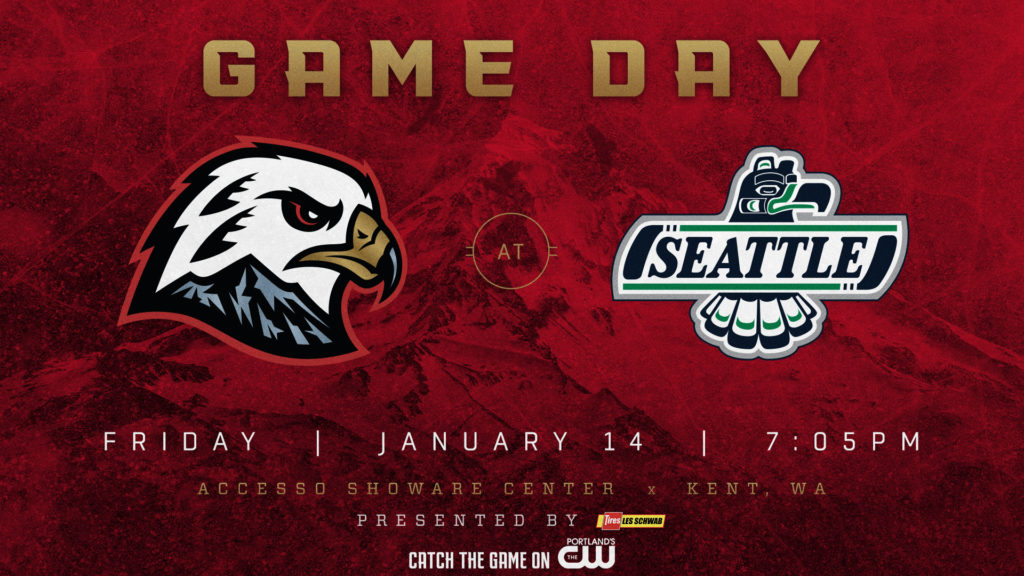 Winners of five straight, the Winterhawks head to Seattle for a rivalry clash with the Thunderbirds.

Previous Meetings This Season: Portland is 2-3-0-0 Against Seattle

The Hawks and T-Birds will get to know each other real well across three matchups in January alone (including this one), and you can catch each one on Portland’s CW! Tune to Comcast 3 or 703 HD to see your Winterhawks Battle with Seattle seven more times this season, plus a bonus matchup with Spokane on Feb. 5.

Looking for some fellow Winterhawks fans to cheer along with? Head out to Replay Sports Pub and Arcade in Beaverton or Icehouse in Oregon City!

Best rivalry in the PNW

Last time Portland and Seattle faced off, Marcus Nguyen scored a beautiful penalty shot goal and Dante Giannuzzi picked up a shutout as the Hawks knocked off the Thunderbirds 2-0 on New Year’s Eve. It was a game that, despite the scoreline, featured plenty of action as the teams traded chance after chance, mixed in a few scraps and put on a show in front of an electric Portland crowd. But these fireworks are nothing new – there’s a reason Portland and Seattle are such heated rivals. The games between them take on new meaning for each club, and tonight presents an opportunity for the Hawks to take one from the Birds on their own ice for the second time this season.

Rollin’ in the deep (lineup)

Portland comes into this game as hot as any team in the CHL, boasting a 10-1-1-0 record in its last 12 games and having won five straight. High-scoring track meets, low-scoring grinds, shutouts, shootouts – the Winterhawks have seen it all and won it all as of late, and bring a new kind of confidence and swagger into accesso ShoWare Center tonight, a marked difference from their last visit which resulted in a 4-2 loss on Nov. 12.

With different players stepping up at different times, the Hawks have found success in their team’s ability to score with any line on the ice. Whether it’s James Stefan and Cross Hanas carrying the load in Kelowna, or Kyle Chyzowski, Marcus Nguyen and Luke Schelter picking up the slack against Seattle and Everett two weeks ago, the Winterhawks’ depth continues to be the team’s strength. And with sure hands between the pipes in Dante Giannuzzi and Taylor Gauthier, they know they have a strong safety net no matter whose number gets called on a given night.

It was a big week off the ice for three Winterhawks as forward James Stefan and goaltender Taylor Gauthier earned respective Player and Goalie of the Week awards from the WHL on Monday, then Stefan and defenseman Marek Alscher were listed on NHL Central Scouting’s mid-term draft rankings on Wednesday.

A lighter WHL schedule last week made Stefan and Gauthier clear choices for the league awards, but don’t let that fool you – after coughing up a goal just 31 seconds into his first Winterhawks appearance, Gauthier was a rock for the better part of 59 minutes en route to a 38-save showing and his first win with Portland. Stefan was everywhere up front, notching two goals and an assist to pace the Hawks attack alongside Cross Hanas, who bagged a trio of points himself.

Alscher was the one of three Winterhawks to be named to NHL Central Scouting’s preliminary list last fall, and is the only Portland skater to be ranked in both editions. The Czech defender has taken on a progressively more prominent role on Portland’s blue line and continues to play strong two-way hockey. Stefan leapt onto the scene ahead of the mid-term rankings list with 31 points in 32 games, and shares the team lead in points with captain Tyson Kozak, a Buffalo Sabres 2021 draft selection. Both players are among a handful of hopeful Winterhawks that could hear their names called in Montreal next summer.

Tonight, we are cheering on: Sam H. from Portland, OR

What our Hawks fan could win: A brand new Corolla