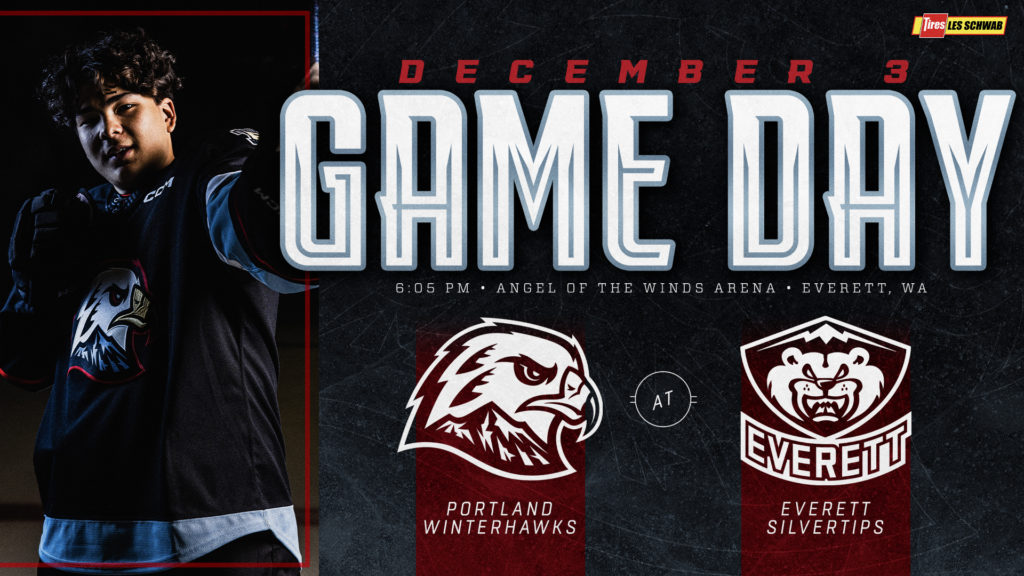 After snapping a three-game skid on Friday, the Hawks head north to take on the Silvertips for the third week in a row.

Venue: Angel of the Winds Arena

About Last Night
It was a spirited comeback from the Winterhawks to snap a three-game losing skid on Friday, knocking off the Victoria Royals 3-1 at the VMC while surpassing the team’s Toy Drive goal of 3,000 donations! Jack O’Brien, Gabe Klassen and Ryder Thompson each scored in the final 40 minutes to erase an early 1-0 deficit and get the first-place Hawks back in the win column.

Friday’s victory also featured a couple of milestones, as alternate captain Robbie Fromm-Delorme skated in his 200th career game, and forward Ryan Miller became the first 2007-born skater to appear in a game for the Winterhawks.

“Just an amazing feeling to be part of the program and take that (solo) lap. The first shift was kind of nerve-wracking, but after that I felt like I could get into my game a little bit,” said Miller following his debut.

Miller’s first contest came 10 days after Hudson Darby and Cole Cairns hit WHL ice for the first time in the Winterhawks’ last meeting with the Silvertips on Wednesday, Nov. 23. Speaking of that game…

Silvertippin’
Just over a week after their last trip to Everett, the Hawks are back at AOTW Arena for another divisional tilt against the ‘Tips.

Portland has fared well against Everett this season with two wins in two meetings, and face the Silvertips for the third of six slated contests in a six-week span. The Hawks have outscored the ‘Tips 9-3 in the first two contests and have opened up an 11-point lead over their green and white rivals in the division standings. Can they make it three W’s in a row tonight?

Steady in the Crease
Each Portland netminder has played one game this week, and each has excelled between the pipes. Dante Giannuzzi gave the Hawks a chance with 32 saves on Wednesday, while Jan Špunar picked up his seventh win of the year last night, stopping 29 of 30 shots against Victoria.

With respective 11-3-1-0 and 7-1-0-1 records, Giannuzzi and Špunar each provide a strong presence in net. Regardless of who goes tonight, Head Coach/GM Mike Johnston knows he’s got two solid options to rely on in Everett.