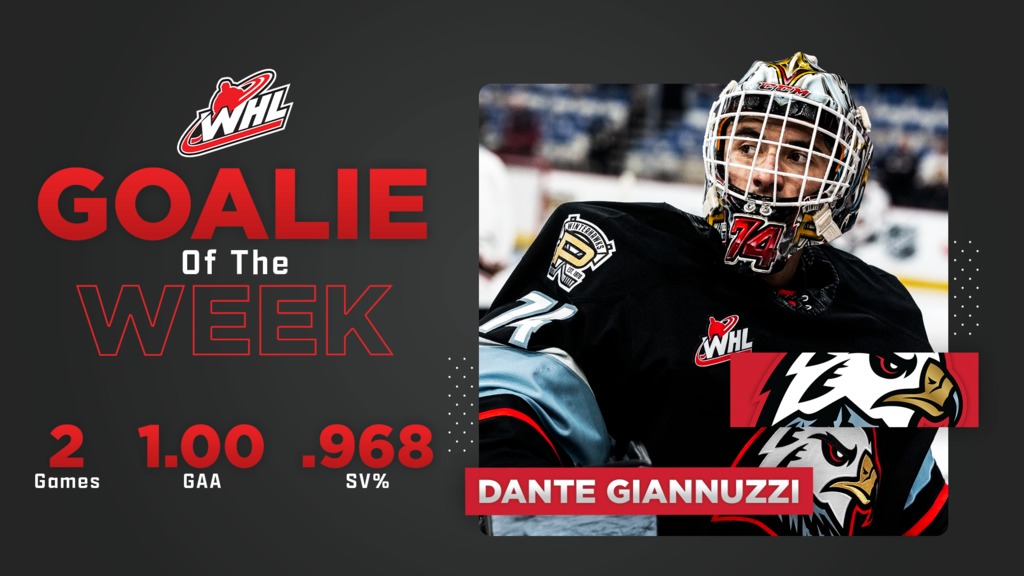 Portland, Ore. – The Western Hockey League today announced that Portland Winterhawks goaltender Dante Giannuzzi has been named Goalie of the Week for the week ending Nov. 20.

Giannuzzi, 20, stopped 60 of 62 total shots in a pair of wins over Calgary and Everett last week, allowing just one goal each game and recording a .968 save percentage to boost his personal record to 10-1-1 on the year with five straight victories. Giannuzzi stopped a season-high 33 shots to pace Portland’s 4-1 victory over the Hitmen on Tuesday, then turned aside 27 in the club’s first meeting with division rival Everett on Friday. The Winnipeg, Man. native’s 10 wins rank tied for third among all WHL netminders and his 2.88 GAA ranks ninth among goaltenders with 10 or more starts.

Following 19 wins in 35 games during the 2021-22 campaign, Giannuzzi has started the lion’s share of games for the Winterhawks with 12 appearances in 19 games. The 6-foot-1, 183-pound former fifth-round WHL Prospects Draft selection has posted 46 wins in 80 career appearances for Portland, with a 2.88 cumulative GAA and .897 save percentage and four career shutouts.

Giannuzzi and the Winterhawks are on the road this week for three games, visiting Everett on Wednesday, Seattle on Friday and Vancouver on Sunday.