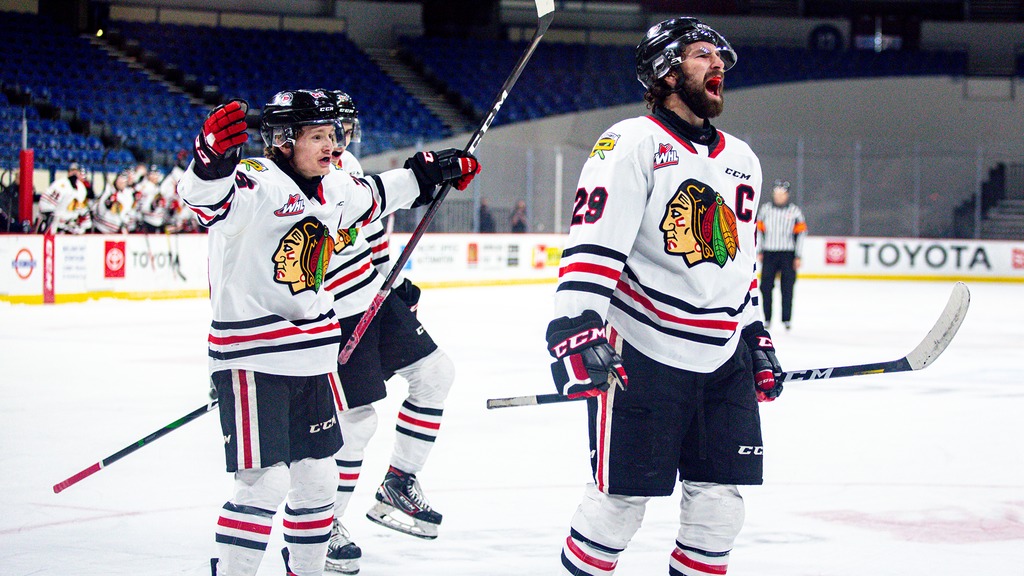 The Winterhawks did it for Nick Cicek, Mason Mannek and Mark “Peaches” Brennan on Tuesday, sending the three into the sunset as winners, 5-3 over Tri-City.

Concluding their 45th season in Portland, the Winterhawks played host to the Tri-City Americans in their scheduled finale Tuesday.

An emotional night in Veterans Memorial Coliseum began before the puck even dropped, as 20-year-old’s Mason Mannek and Nick Cicek started the night with a solo lap during warmups, getting a brief recognition before the rest of the team joined them on the ice.  The heartstrings continued to be tugged at leading up to the game’s start, when both were surprised with a video message from their families.

When it came time to get down to business, the two were clearly still able to get the job done, connecting for the first goal of the night in fitting fashion.

Clay Hanus extended Portland’s lead to 2-0 to start the second, but Tri-City turned the momentum by capitalizing twice, sending the game to the third tied at 2-2.

The home side was indeed able to get back on track in the third though, as Kishaun Gervais netted his first of the season, Gabe Klassen recorded the game-winner with another power play goal and Jaydon Dureau concluded the team’s scoring race with an empty netter, his 31st point in the 24-game season.

When the final horn sounded, the Hawks celebrated around their veterans, as well as Head Equipment Manager Mark “Peaches” Brennan, sharing one final embrace on the ice to conclude the season.

“I really liked our first and third periods.  I thought we came out great.  There was a lot of emotion in the game because of Cicek and Mannek.  They’re well respected guys here in our locker room.  They started and ended their WHL careers as Winterhawks.  I thought they played a great game, it was great to see “Cheech” get the goal and it was a great night for him.  On top of that, you have Peaches, after over 2,200 games in hockey, certainly quite a career.  We’ll have the opportunity to honor him with our fans next year, we’ll have a special night for him and his family, but it was special for our locker room to pay tribute to him.”

– The battle was also the 2,251st and final for Winterhawks Head Equipment Manager Mark “Peaches” Brennan, who announced he would be retiring earlier this season.