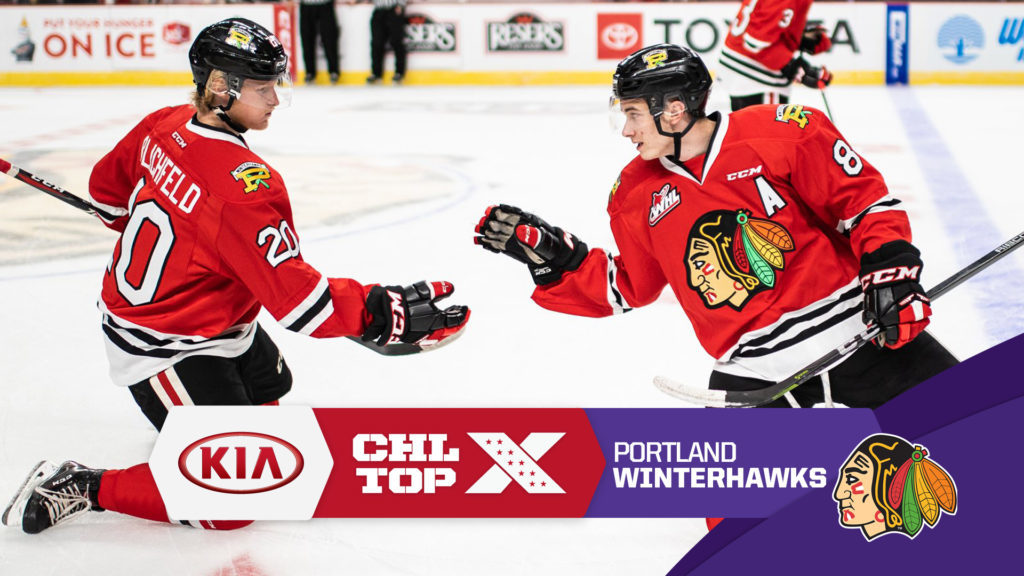 January 17, 2019- CHL.com – The Portland Winterhawks return from a lengthy road trip this week having won five of their six games through Saskatchewan and Manitoba, attaining honorable mention status in this week’s Kia CHL Top 10 Rankings.

The 26-12-3-2 Hawks sit second in the U.S. Division, 11 points back of first place Everett as they embark on a five-game home stand starting Saturday against those same Silvertips.

The dynamic duo of WHL scoring leader and reigning Player of the Month Joachim Blichfeld (38-41–79) alongside Vegas Golden Knights first round pick Cody Glass (12-46–58) continues to create good things offensively, giving the Winterhawks one of the league’s best 1-2 punches up front.

“Cody sees people all over the ice who nobody can see except for the fans,” Winterhawks head coach Mike Johnston told the Portland Tribune’s Kerry Eggers earlier this season. “It’s amazing how he makes plays. Cody and Joachim have great chemistry. Joachim is a shooter. He gets open. He’s really smart.”

“But Cody is just so good with the puck,” Johnston continued. “He can shoot, he can pass, he can do so many things. I like his work ethic this year. Cody has been the driving force with our team. He’s a real leader. We have the best player in the league, and I think he’s going to be a really good NHL player.” 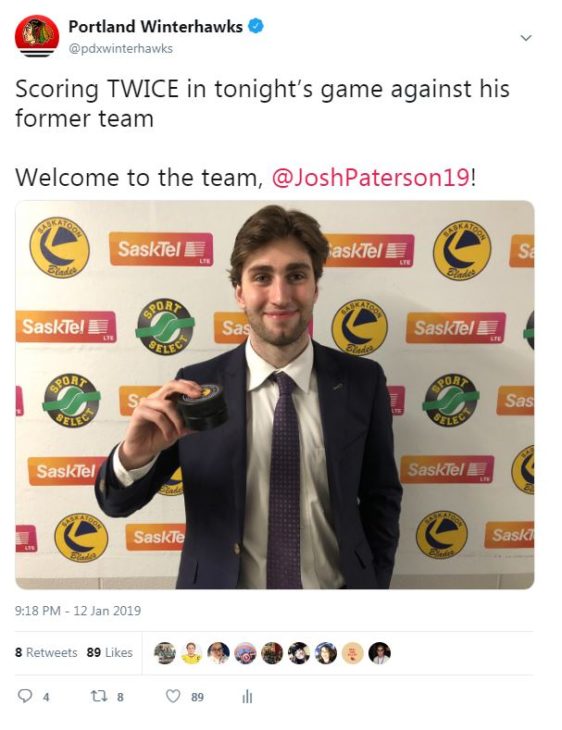 While Blichfeld and Gricius are both in the midst of eight-game point streaks, one shouldn’t overlook the success of 16-year-old rookie Seth Jarvis. The 11th overall pick of the 2017 WHL Bantam Draft has 25 points (12-13–25) over 38 games this season and has lit the lamp in six of his last eight contests. Jarvis enjoyed a successful World Under-17 Hockey Challenge back in November, registering five points (2-3–5) over six games as a member of Team Canada Red.

The strong play of Jarvis and other 16-year-olds in Cross Hanas (5-9–14) and Robbie Fromm-Delorme (2-5–7) gives Portland plenty of hope for the future.

“We decided to commit to those guys because we like them,” said Johnston of the team’s young contingent up front. “They’re going to be really good players, and they’re coming along, but they have their highs and lows.”

Though 19-year-old Shane Farkas (25-9-3-2, 2.89, .901) started 38 of Portland’s first 40 games of the season in the crease, Johnston kept an eye on the future and bolstered Portland’s goaltending situation last week with the addition of St. Louis Blues prospect Joel Hofer (6-22-2-1, 3.99, .903) from the Swift Current Broncos. The 18-year-old was thrust into his first test with his new club shortly after being acquired, facing the CHL’s top-ranked Prince Albert Raiders in a 4-2 road loss.

“This move gives us two good goaltenders,” said Johnston. “We have depth in goal. It gives us a guy in the 2000 (born) age group who’s really good. I think it’s definitely what we needed.”

The Hawks face divisional foes in four of their next five contests including a home date against Everett on Saturday before the Tri-City Americans visit on Sunday and Wednesday.

While it looks as though Portland will be able to lock down home ice advantage in the first round of the WHL Playoffs, they’ll try and chip away at Everett’s U.S. Division lead in the coming weeks with three meetings between the two clubs left on the schedule.