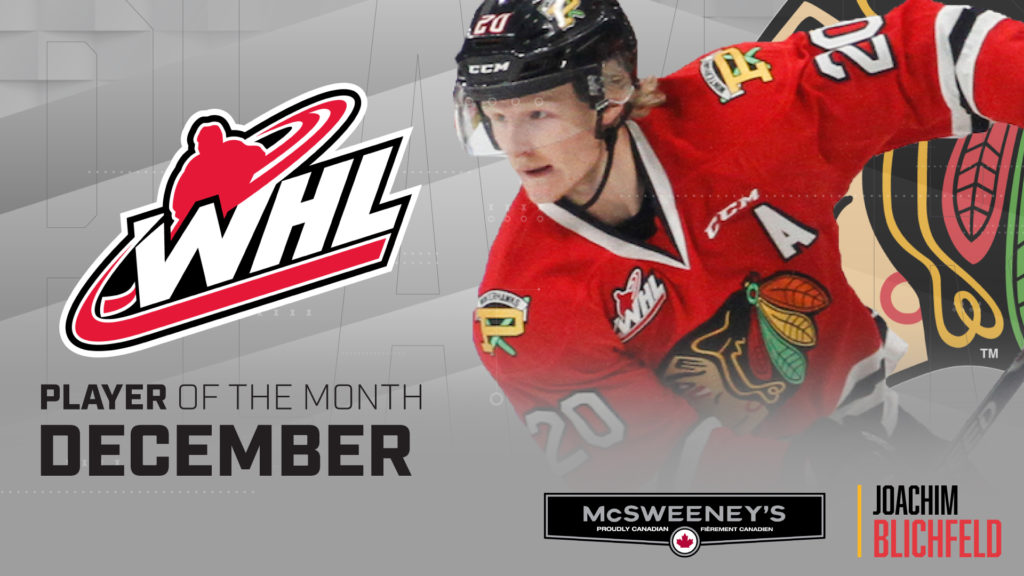 Calgary, Alta. – The Western Hockey League announced today that San Jose Sharks prospect Joachim Blichfeld of the Portland Winterhawks has been named the WHL McSweeney’s Player of the Month for December 2018.

Blichfeld recorded 26 points (13G-13A) and a plus-seven rating in 11 games during December, vaulting the Frederikshavn, Denmark product into the WHL scoring lead as the Winterhawks posted a 7-1-3-0 record in the final month of 2018, keeping them in second place in the U.S. Division and moving them to within a point of second place in the WHL’s Western Conference.

With points in 10 of 11 games this month, Blichfeld had six multi-point efforts, including the third five-point game of his WHL career. He also had a pair of four-point games and three three-point games. Blichfeld also recorded three multi-goal games during the month, including the third hat trick of his WHL career December 2 against the Kootenay ICE. He also had a pair of two-goal games.

He currently leads the WHL with 72 points (34G-38A), including 12 power-play goals, three short-handed goals, and three game-winning goals. Blichfeld also leads the WHL in goals and is tied for third in assists.

The 6-foot-1, 188-pound, 20-year-old forward was drafted by the San Jose Sharks in the seventh round, 210th overall, at the 2016 NHL Draft. Blichfeld signed a three-year, entry-level contract with the NHL club in December 2017. The Winterhawks selected Blichfeld in the second round, 85th overall, in the 2016 Canadian Hockey League Import Draft.

The Winterhawks return to action Friday, January 4 at 5:00 p.m. PST against the Swift Current Broncos, beginning a six-game road trip through the East Division.