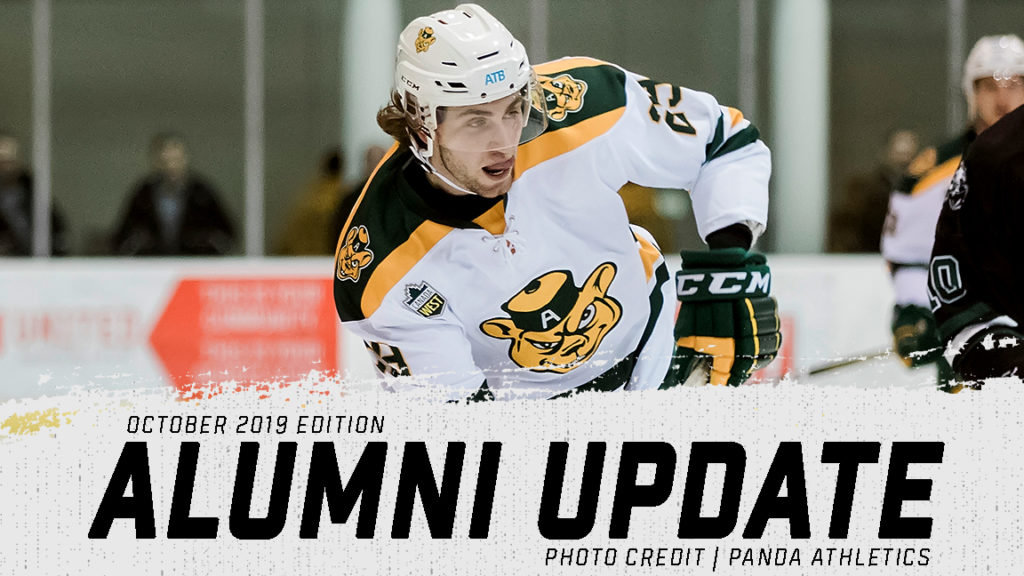 Twenty different Winterhawks alumni are taking advantage of their WHL Scholarships for playing in the league. At various universities across North America, 14 are prolonging their hockey careers as student athletes, while six others are focusing strictly on academics.

Of the 20 alumni currently attending college, the Winterhawks are contributing financially to 13 former players this semesters. One month into the 2019-20 season, we take a look at their performances on the ice.

Join us at winterhawks.com at the top of each month as we dive in to an alumni update.

Paterson scored his first career USports goal and hat trick on October 25 against the University of Lethbridge Pronghorns. Burke is ranked second among Canada West goaltenders with a 1.85 goals-against-average and one shutout.

Iverson, a former Winterhawks captain, WHL champion and a veteran of 366 Winterhawks games, is tied for second on the Cougars with 12 points (4G, 8A) in eight games. On October 2, the Minneapolis, Minnesota native was recognized as Canada West’s Second Star of the Week.

Former Winterhawks Brett Clayton (2015-18), Shaun Dosanjh (2016-17) and Matt Revel (2016-17) have suited up for the University of British Columbia this season. Of the three, Clayton is tied for sixth in UBC Thunderbirds scoring.

Mitchell Walter, in Portland during the 2014-15 season, is focusing on his education at the British Columbia Institute of Technology.

Former Winterhawks teammates Adam Henry (2014-15) and Colton Veloso (2013-17) have reunited at the University of Manitoba. Defenseman Adam Henry has averaged over a point-per-game through the first month of the season and Veloso is tied for fifth on the team in scoring.

Former WHL Champion Josh Hanson is the veteran of the group with 94 collegiate games played.

Playing for the University of Prince Edward Island, Conor MacEachern (2015-19) scored his first career collegiate goal on November 2 with the Panthers.

Alex Overhardt (2014-18) is one of two Winterhawks attending an American university this season. Due to NCAA ineligibility from playing in the WHL, he is not able to play hockey while attending the University of Denver. Overhardt is tied for 16th on the Winterhawks all time games played list with 273 regular season games.

Former Winterhawk Nick Heid (2014-16) is attending the University of St. Thomas in St. Paul, Minnesota, but is not playing hockey as a result of the same conditions as Overhardt.

Winterhawks Cap Off Perfect Week with a Win
2 days ago