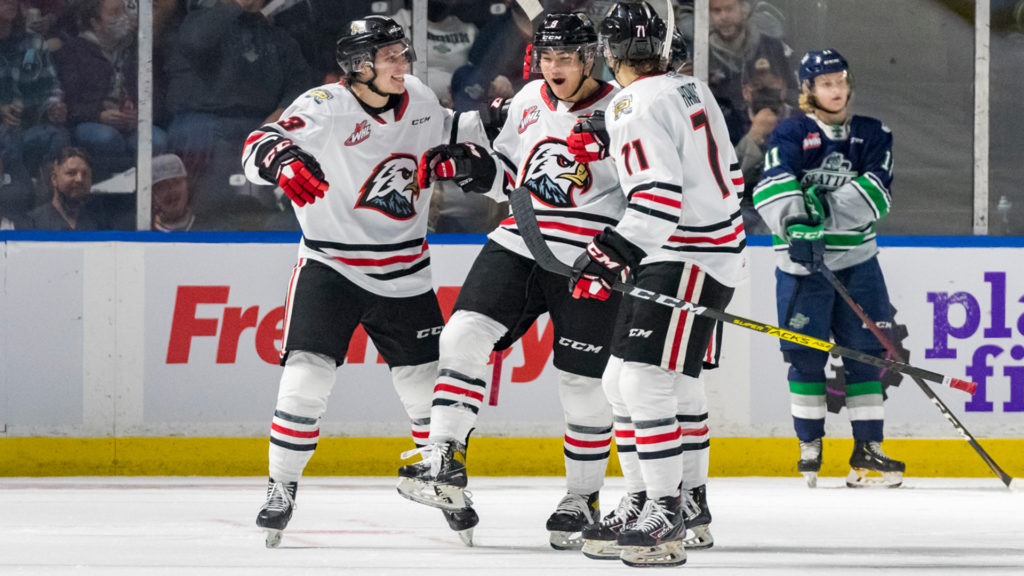 The Portland Winterhawks earn their first win of the season, beating Seattle 4-2 and spoiling the Thunderbirds return to the ShoWare Center.

The rookies came through big on Saturday night to help guide the Hawks to their first win of the season.

Goaltender Lochlan Gordon turned aside 28 shots in his WHL debut to beat Portland’s biggest rival and when the team was in need of a third period goal, Luke Schelter scored his first WHL goal, the eventual game-winning goal.

“It’s great to see the young guys have some success.  I think it’s all about growing and getting better.  Lochlan Gordon has played hard for us since training camp.  He’s really paid his dues, he works hard at practice and he got rewarded with a really good start,” associate coach Don Hay said postgame.  “And Luke Schelter to get that goal, the game-winning goal, is always very special when you get a goal, but to get a game-winner in a rivals building like this I think is really exciting for him.”

It was clear in the locker room before puck drop to get off to a strong start and take control of the game.  Message received.  Thanks to an early power play, James Stefan wired in the first goal of the game from the left circle, giving Portland a 1-0 advantage after 20 minutes of play.

Seattle responded with a two-goal second period, but the Hawks buckled down and tied the game at 2-2 with their second power play tally of the night courtesy of Aidan Litke.  Forty four seconds after Seattle took the lead, Portland generated a rush through Tyson Kozak and James Stefan and a Stefan shot generated a rebound in front for Litke to flush home.

With the game on the line in the third period, Portland upped its pressure and scored the go-ahead tally in the 11th minute of the frame.  Chyzowski stole a puck at the offensive zone blue line and fed it up the wing for Marcus Nguyen.  Showing patience with the puck and allowing Schelter to get his stick open at the top of the crease, Nguyen slipped a centering feed to Schelter to redirect in the eventual game-winning goal.

Portland did a nice job of limiting Seattle’s chances down the stretch and Clay Hanus sauced in an empty net goal in the final two minutes to solidify the victory.

“I thought it was a great, gutsy performance.  Kade Nolan was out and the guys really stepped up. I thought there was a real sense of urgency in our game. You know the guys knew this was a critical game for us moving ahead here and I thought we really competed hard. Lochlan Gordon went in goal and was really solid for us.”