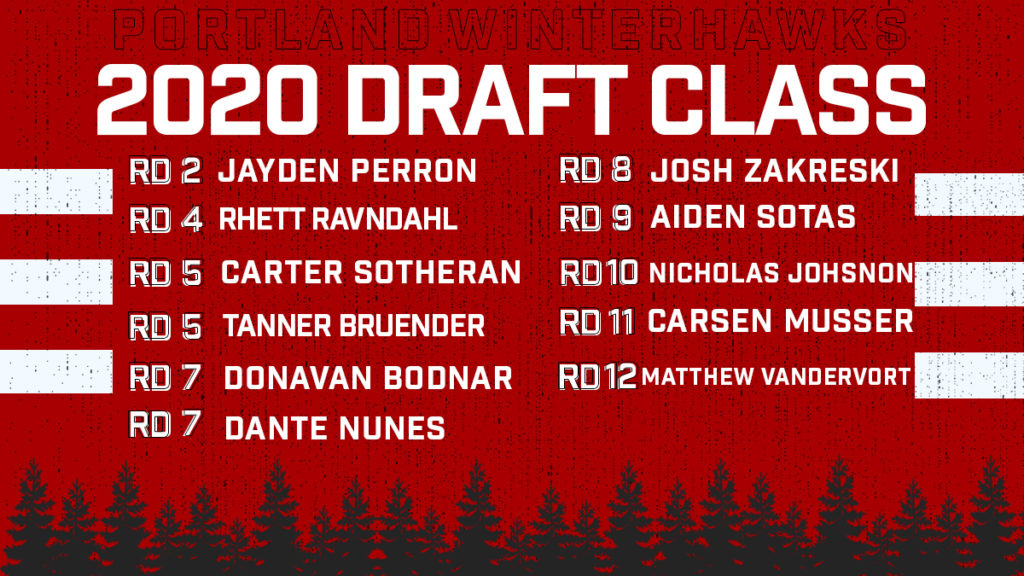 It was an exciting day for hundreds of young hockey players from all over North America on Wednesday as the 2020 WHL Bantam Draft.

The Portland Winterhawks made 11 selections over the course of the morning, selecting six forwards, three defensmen and two goaltender from the 2005-born age group. Eight of the prospects call Canada home while three are from the States.

“I thought our scouts did a great job in preparation for the draft especially under the circumstances. We were really pleased to get the selection of players and to ensure we had every position covered,” stated Vice President, General Manager and Head Coach, Mike Johnston.

The Portland Winterhawks used their first pick of the draft on forward, Jayden Perron from Winnipeg, MB. Perron spent his 2019-2020 season playing for the Winnipeg Warriors Bantam AAA team where he scored an impressive 46 goals and had 58 assists for a total of 104 points in 36 games.

“Our first pick Jaden Perron is an elite talent. Like all our draft picks we are looking forward to getting to know them and their families over the next several months,” said Johnston.

The Hawks used their second of the draft to select a strong defenseman Rhett Ravndahl from Nipawin, SK. Playing for North East Wolfpack Bantam AA, Ravndahl recorded 29 points in 31 games.

Very excited and honoured to be drafted by the @pdxwinterhawks

With the third pick for the Winterhawks, they selected their second defeseman of the day, Carter Sotheran from Sanford, MB. In 36 games with the Pembina Valley Hawks Bantam AAA team, Sotheran recorded 44 points on the season.

In the 5th round, the Portland Winterhawks drafted Tanner Bruender from Portland, Oregon. Bruender was the second U.S. player drafted on Wednesday and is the first Portlander to be drafted by the Winterhawks since Paul Gaustad.

Bruender grew up in Portland playing at the Winterhawks Skating Center and then spent the last two years in Minnesota.

With their second selection of the 5th round, 110th overall, the @pdxwinterhawks selected Tanner Bruender from the Chaska/Chanhassen Stormhawks in Minnesota

He is a left-shot forward. Tanner’s stats are not as readily available as some of the other selections. #WHLBantamDraft

The Portland Winterhawks acquired their fifth pick from the Victoria Royals and picked up goaltender Donavan Bodnar from West St Paul, MB.

Congrats to @RINKHockeyAcad student athlete Donovan Bodnar on being selected in the seventh round, 141st overall, by the @pdxwinterhawks!#WHLBantamDraft pic.twitter.com/A9xhG5Nn3Q

From West Kelowna, BC, Dante Nunes was selected 154th overall by the Winterhawks. In 22 games, Nunes recorded 20 points, 16 of which assists.

Josh Zakreski was drafed 176th overall by the Hawks and put up impressive numbers last season. The Saskatoon forward scored 32 goals and had 29 assists in 31 games for the Saskatoon Maniacs Bantam AA team.

🔵🟠 DRAFTED 🔵🟠
Congratulations Josh Zakreski on being selected in the @TheWHL Bantam draft, 8th round, 176th overall by @pdxwinterhawks 🔥 pic.twitter.com/iKhjPPcW3e

Notable Winterhawks drafted in the eighth round of the Bantam Draft:
2013 – Skyler McKenzie, Forward (Drafted 7th round NHL.)

Grand Prairie, AB native, Aiden Sotas was drafted in the 198th overall by the Winterhawks. He played for the Yellowhead Chiefs Bantam AAA last season and posted 29 points in 33 games.

Very grateful to be selected by @pdxwinterhawks ! I would like to thank my parents, coaches, teammates and trainers for helping me get here. Back to the grind ! pic.twitter.com/l92ACOlqdX

Congratulations to Bantam Prep forward Nicholas Johnson on being drafted to the @pdxwinterhawks in the #WHLBantamDraft today! pic.twitter.com/JGTTyHIc2A

The Portland Winterhawks drafted Carsen Musser from Sherburn, Minnesota in the 11th round of the Bantam Draft.

I would just like to thank the Portland Winterhawks @pdxwinterhawks for drafting me today. I greatly appreciate it and I’m glad that my hard work is paying off. But this is only the beginning as I still have to get better.

With the Hawks final pick of the draft, they selected their third US player, Matthew Vander Vort from Edina, Minnesota.

This pick becomes the 300th bantam draft selection in @pdxwinterhawks franchise history, 18 of those are from Minnesota. Overall: